Get the latest news everyday.

Gasoline prices prior to Labor Day lowest in 12 yearsSeptember 2, 2016

The U.S. average retail gasoline price increased 51¢/gal since the recent low point in mid-February, when gasoline prices averaged $1.72/gal. The rise in gasoline prices was the result of higher crude oil prices and strong demand during the summer driving season. 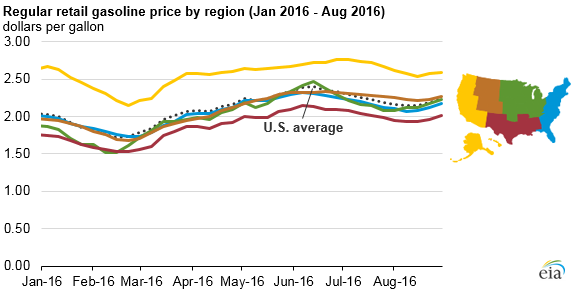 On a regional basis, average gasoline prices range from $2.59/gal in the West Coast region to $2.01/gal in the Gulf Coast region. The West Coast, particularly California, has the highest gasoline prices among states surveyed in EIA’s weekly Gasoline and Diesel Fuel Update, which is the result of a tightly balanced gasoline market, tighter environmental specifications, and higher taxes in West Coast states. As of Monday, August 26, gasoline prices averaged $2.71/gal in California and $2.74/gal and $2.75/gal in Los Angeles and San Francisco, respectively.

The Gulf Coast region, where much of the nation’s petroleum refinery capacity is located, continues to have some of the lowest-priced gasoline in the nation, averaging $2.01/gal for the region and $1.97/gal in Houston.

As fall approaches and U.S. driving decreases, lower gasoline demand, shifts to less costly winter fuel specifications, and reduced crude oil purchases by refineries undergoing seasonal maintenance have the potential to put downward pressure on crude oil and gasoline prices. In the August Short-Term Energy Outlook, EIA forecasts U.S. regular gasoline prices will decline to an average of $1.95/gal during the fourth quarter of 2016 and will average $2.06/gal for 2016.